Audio tracks contain digitally sampled sounds. In Audacity, a channels of sound is represented by one mono audio track, a two channel sound by one stereo audio track. Each audio track has a sample rate: common values include 8000 (telephone), 16000 (speech), 22050 (many games of recent years), 44100 (CD Audio), and 48000 (DAT). You can specify a different sample rate for each track. You can import audio of any sample rate or bit depth and Audacity will resample and convert it to the project rate and bit depth on the fly, as well as upon Export. You can choose different sample rate conversion qualities for playback and Exporting. 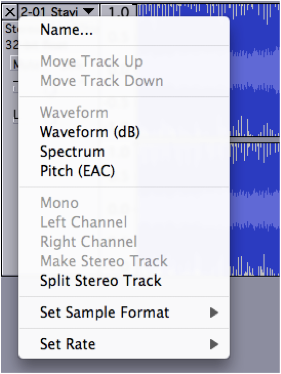 The DROP DOWN MENU shown to the right is found under the triangle button next to the file name on the track.

Here you can change the name of the track.

You can change the waveform view into spectrum or pitch for certain kind of sound editing tasks.

You can split the stereo into two tracks for separate edits.

You can also change the sample format, that is, the bit-rate. The lower the bit-rate the smaller the file size but also the less true the sound.

Finally you can set the Herz rate or cycle rate. Again a higher rate is a true sound and a larger file. CD sound quality is 441100 hz. But most voice recordings sound just fine at lower rates.

Gain (Volume): This slider controls the track volume, or rather the overall gain of that particular track. It's default position is in the middle, as shown in the picture to the left. This setting represents 0 dB.

Tip: the control moves in increments of 3 dB. Hold down Shift to adjust by 1 dB at a time.

] Pan: This slider set the panning position of the track in the stereo field. It's default position is in the middle, as shown in the picture to the left.

Tip: the control moves in increments of 10%. Hold down Shift for finer control.

Mixing background music with a voiceover

See Effects Menu to the right.

Using the menu FILE→EXPORT MP3 or FILE→EXPORT WAV you can save your project into a listenable audio file, and then burn it to a CD or what-have-you.

To EXPORT to MP3 you will need to install the appropriate codec for this file type on to your Mac or PC.

For a Macintosh you will need to either purchase QuickTime PRO or install the freeware utility Perian which adds various codecs to QuickTime, including MP3.