Robots, like the ones sold by Double Robots (http://www.doublerobotics.com) and Padbot (http://www.padbot.com), could potentially be used in higher education in many ways, including hybrid classrooms with both online and in-person students, remote professors teaching from a distance, admissions tours around campus, and in library services for giving remote tours and showcasing innovative technology. Do telepresence robots bring new possibilities to higher education?

Determine the viability of telepresence in the classroom

Examine usage of telepresence robots outside of the classroom 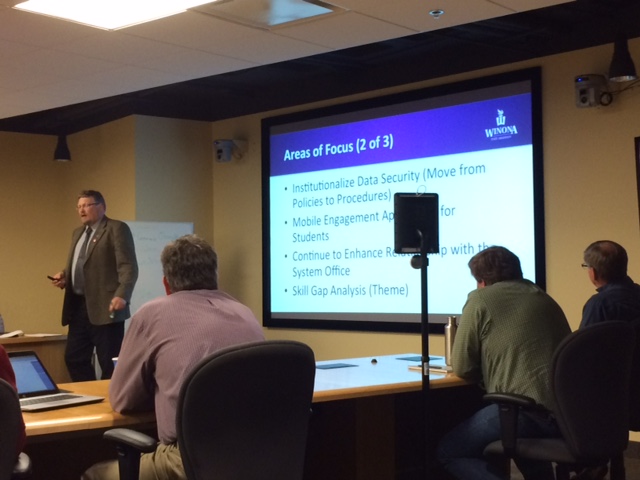 Attending a meeting while off campus. (A Double 2 in action.)

There are several obvious things a telepresence robot brings to a school: remote access, flexibility, and communications to name a few. There were also some others uncovered in the testing: they look really cool (think recruitment), they allow access where otherwise impossible or at least impractical, and they cause creative thought.


A Winona State economics professor had to be out of town the day one of his classes featured student presentations. He had a Double 2 dropped in the room and he used his iPad to drive it from more than 250 miles away. He stated the experience went very well, it was almost as good as being there in person. He said the sound worked great; he could hear the presentations clearly and could converse with the presenter and other students.

The class occurred in a tiered classroom so there were some piloting issues. It worked best when he was on the second tier so he could interface well with the attendees. The downside was he needed someone in the room to pick up the robot and put it on the second tier. Also, because of the lighting in the room, it was difficult to read some of the Powerpoint slides.

He will do it again and wants to look into other ways to use it.

The Double 2 filled in at an IT meeting for a staffer that was at a remote campus. (See the image at right.)

Remote tours
Currently in the planning stage, a robot will be used to allow for remote tours of area businesses. By dropping the robot at the business before the class meeting, it can be driven from the classroom and the visuals projected on the wall. Students can then tour local businesses, interact with the tour guide, and not need to take the extra time for travel to the business and back tot he school. This allows for tours to be conducted anywhere the robot can be delivered, not just somewhere within a short commute.

Prospective students can drive the robot from home it they wish to tour the campus as part of the admission process. Students that cannot afford the time or the money to visit the campus can instead use a robot to be part of a tour. Great for recruitment.

The following schools are contributors to this pilot:

What was discovered during the pilots

Tips and tricks from project pilots

What was discovered during the pilots

The Padbot robot was quickly abandoned.

Tips and tricks from project pilots

Don't bother with the Padbots.

Participants were interviewed to determine their experiences and reactions. Recaps of their input are included in this article.

There are some real possibilities for the use of telepresence robots. It is a great way to get people into remote situations without taking the time or expending the resources to make a physical visit. The WSU Foundation brought in an alum to a meeting from Florida, giving the group access to the alum's experience first hand with the investment needed to transport the alum and cover expenses.

Students with telepresence robot experience found it difficult to imagine uses as a student but fully appreciated the possibilities for a faculty member or community member.

There are some other places where telepresence robots need to be introduced:

Tell us your story

Please share any experience, reactions, or questions with us so we can add to the content of this article and make it more relevant for the next person. Email your input to nthomes@winona.edu and we will add it to this article. Thanks.

Want more information on the McLAB or have an idea you would like to pursue? Contact Norb Thomes at (507) 457-5043 or nthomes@winona.edu.